Hawks run into a buzz saw 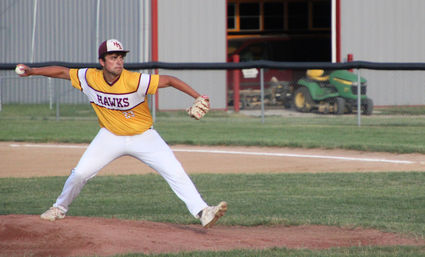 Jordan Ortega delivers a pitch to the plate during the Hawks' game with West Sioux on June 18.

Remsen St. Mary's hitters connected with the baseball early and often during an 18-1 win over Hartley-Melvin-Sanborn, on June 14 at Remsen.

The No. 4 team in Class 1A pounded out 18 hits, including eight doubles.

"We ran into a buzz saw," said Hawk coach Jeremy Gloden. "They are a very good hitting team."

St. Mary's scored eight runs in the first inning and then sent 15 hitters to the plate during a nine-run second inning. They scored their final run in the third.

H-M-S's only hit was a double by Samuel Heyn in the second inning. He scored on an error.

Jordan Ortega was the losing pitcher,...