Demo to begin in near future 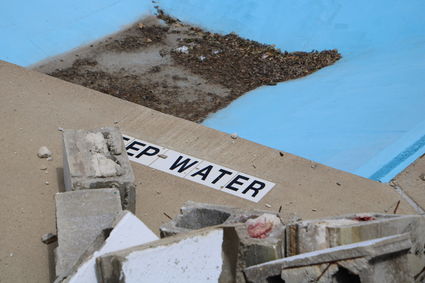 The area around the deep end at Hartley's pool looks a little different. The structure that housed chemical equipment was knocked over last week, and trees surrounding the facility were also removed to accommodate future construction work.

A city crew last week removed five trees and knocked down the small structure that housed chemical equipment on the southwest side of the facility. According to Superintendent of Public Works Jaron Benz, the work completed the city's demolition obligations prior to the construction company's arrival.

He expected things to really kick up within the coming week.

"Demolition is tentatively scheduled for the first week of July, and that should go quick," Benz said. "I'm assuming they'll just dig most of it out, load it up and haul concrete to the city dump."

In addition to tree removal and minor building demolition, an outside company installed a silt fence and chain-link fence around the work area during the past week. Some construction equipment has been moved to Hartley, Benz said.

Eriksen Construction, of Blair, Neb., is building the new aquatic center for $2,722,200. With engineering fees and other expenses included, the total price tag will run approximately $3,063,525.

Construction will begin in earnest once the old facility is removed. The new pool is hoped to be open by early July of 2022, or sooner if possible. It is being paid for by a $1.7 million bond issue, grants and donations.

The square footage of the new pool will be comparable to the current one. Once constructed, the facility will include a zero-entry play area with a family slide, four swimming lanes, deep water diving and swim area, basketball hoops and a volleyball net, new bathhouse, and a large deck area with shaded zones.

The pool will be built at its current location in Neebel Park.