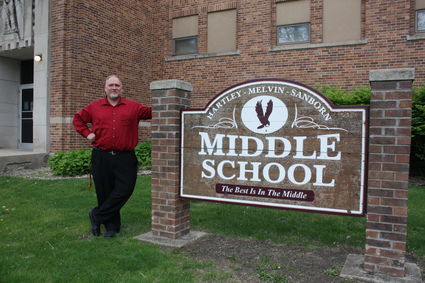 After nearly two decades at the helm of H-M-S Middle School, Mark Dorhout is leaving the district for a new teaching job at Panorama.

Mark Dorhout is stepping out from behind the principal's desk and moving back in front of the classroom.

The Hartley-Melvin-Sanborn Middle School principal is leaving the school district when his contract expires June 30. Dorhout has led the junior high since 2004, which is a long time for someone in that role.

"To be in one district as middle school principal for 17 years is not typical," he said. "I feel like it's my calling to be with middle schoolers. Yes, they're going through a ton of difficult times, but it just works for me."

Dorhout has accepted a position teaching junior high science in the Panorama Community School District for the 2021-22 school year. His wife, Nicole, will head to Panorama as well and hold the same middle school language arts position that she does at H-M-S.

The move will allow the Dorhouts to be closer to family. Their eldest son, Casey, has a child on the way, and their younger children, Hunter and Johanna, both live in eastern Nebraska.

"When we talked to [my parents] about this, they said, 'You should go do that. You will never regret being that close,' " Dorhout said.

Dorhout came to H-M-S for that very same reason in 2004. A Rock Valley native, he wanted his children to grow up around their grandparents and other family members.

Prior to relocating to northwest Iowa, the family lived in Manchester as well as Wisconsin and South Dakota. He credited his coworkers for making the 17 years here exceptional.

"It's sad. I immediately think of all the people I had rock-solid relationships with that I'm not going to see on a regular basis anymore," he said. "The people are the thing that I'm really going to miss more than anything else."

Dorhout has seen some large shifts in education since he first started, most notably in technology. However, he believed the amount of screen time kids rack up on a daily basis while staring at cell phones, tablets and laptops isn't necessarily a positive thing.

Dorhout was also worried about online bullying and the anonymity provided to people by social media platforms.

"I think they are losing touch with some very important things, but that goes for adults, too," he said. "We probably spend 2-3 hours a day on Google-related stuff here at school, and I'm not so concerned about that. What I'm concerned about is the unsupervised SnapChat-type apps."

The longtime principal has also witnessed other changes in students throughout the years.

"The number of people trying to choose to attain excellence is becoming less and less. There are exceptions, but I think there is more of a complacency nowadays," he said. "But overall, kids are kids, and they're still doing the things they've always been doing."

As Dorhout looks back on his career at H-M-S, he is also looking forward to returning to the classroom. He said education is "light years" ahead of where it was when he moved over to the administrative side of things and is eager to find his niche.

"They hired [Nicole and I] because they obviously wanted two people with middle school experience, but what that role is I don't know yet," Dorhout said. "Probably the weirdest thing for me will be finding my role down there being a classroom teacher."

He was also excited to build a teaching relationship with his wife, who will be instructing the same group of students as him.

"It'll be quite interesting, I think," he said. "We're a very opposites attract type of relationship, so it will be fun to see how that works in the classroom."

As his days wind down at H-M-S, Dorhout was simply appreciative of the group he's worked with at the middle school.

"To be part of a team like this has been so awesome," he said. "Nobody is afraid to get out of their comfort zones. They just go do it and everyone pitches in."