Handful of strokes makes the difference 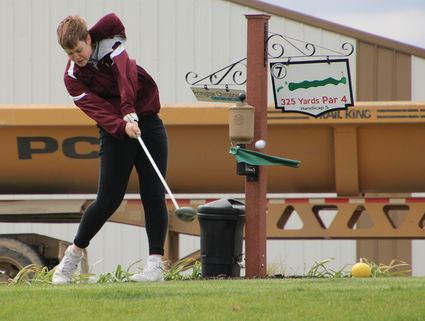 Elle Mastbergen tees off during the first round regional meet at Primghar. Her 18-hole score of 113 was tied for the best by an H-M-S golfer.

Only a handful of strokes prevented Hartley-Melvin-Sanborn from advancing to the second round of the Class 1A girls' regional tournament.

Competing in the first-round meet on May 17 at Primghar, H-M-S finished with a team score of 462. That was five strokes behind the third-place team, MMCRU, which did qualify for the second round of regional play because South O'Brien, the host school, finished in the Top 2.

Central Lyon won the meet with a 388 team score and South O'Brien was second at 422.

"Overall, I was very pleased with the girls," said Hawk coach Cheryl Kroese. "I'm sad for them that...