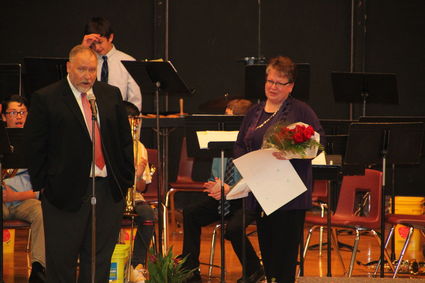 The final concert of 2020-21 was an appropriate send-off for Hartley-Melvin-Sanborn Middle School's longtime instrumental director.

The seventh and eighth grade concert band, jazz band and choir presented their last performance on May 18. The students also recognized their director, Lavila Nelson, who is retiring after 35 years of teaching, with all but two being at H-M-S.

In the program notes, Nelson thanked all those who made the years of making music at H-M-S a wonderful experience.

"In my 33 years at H-M-S Middle School, I've had the pleasure of working with a lot of great kids, colleagues and other people, and leave with many wonderful memories and friends," she said.

Also recognized was Chris Van Meeteren, who concluded many years of service as piano accompanist for the middle school choir.

The concert band performed "Portrait of a Clown," "As the Robin to the Meadow," and "King's Mountain Adventure" which included faculty, staff and band friends.

Choir selections were "My Sha-la-la-la Locker's Stuck," with a speaking solo by Moriah Otto, "Fly Away Home" and "Seize the Day," which also included guest singers.

The concert was possibly the final significant public event to be presented in the former H-M-S Elementary School. The building has been the middle school's temporary home for the past year while a new facility was being constructed at Sanborn.

The district intends to sell the property or have it torn down after equipment is removed.