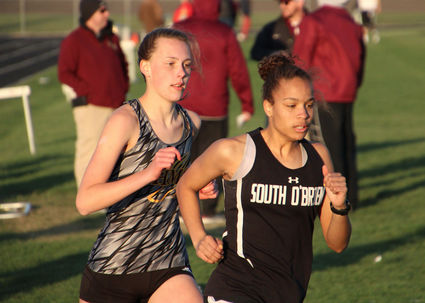 Madison Otto and a South O'Brien competitor work for position during the 1500 meter run at the WEC meet. She placed fourth in the race.

A school record was among the highlights of performances last week by the Hartley-Melvin-Sanborn girls' track and field team. The Hawks hosted the War Eagle Conference meet on May 3 and traveled to Paullina on May 6 for the South O'Brien Wolverine Relays.

At the War Eagle meet, Jasmine Lux broke the school record in the 400 meter dash. She ran 1:00.57, which broke the previous record of 1:00.86 by Shanna Vetter. Although Lux finished third in the race, it was an extremely competitive field, according to Hawk coach Nicole Dorhout.

"This was a great race," Dorhout said. "Jasmine was running against two quality sprinters who also ran great times. It was fun to watch."

"This relay has been our most consistent relay event this year," Dorhout said. "We continue to improve on it."

Other place winners at the conference meet included Madison Otto, who was third in the 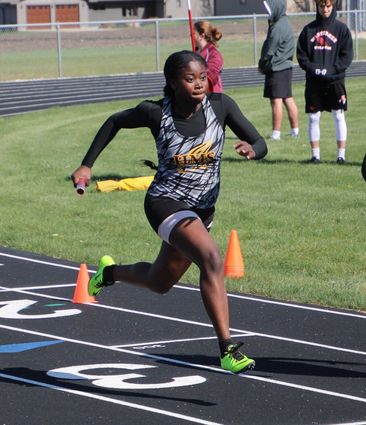 Emily Mutombo gets out to a fast start for the second leg of the sprint medley relay at the conference meet in Hartley.

Unity Christian also dominated the field of the Wolverine Relays, winning the girls' title with 184 points. South O'Brien was runner-up with 133, followed by Sioux Central 130, Alta-Aurelia 62 and H-M-S 50.

The Hawks are now preparing for the state qualifying meet on Thursday, May 13 at Lawton-Bronson. Dorhout said that some bright spots have been emerging.

"I'm looking forward to Thursday's meet because there are some good things happening," she said. "It will be exciting from now until the end of the season."