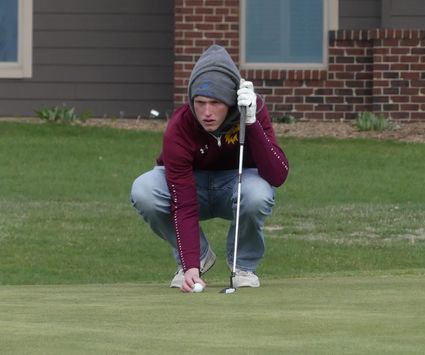 Ben Haack places his ball and studies the green while competing at Sanborn. He was one of the Top 4 golfers in the meet.

Leading the way were Samuel Heyn with a 45, Ben Haack with a 49 and Wyatt Borden with a 50. Keith DeBoer rounded out the team scoring with a 53. The rest of the varsity lineup included Spencer McCarter with a 55 and Lucas Kroese with a 57.

West Sioux's only medalist was Chris Schmidt who fired a 50.