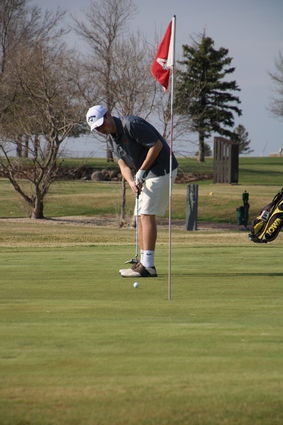 Samuel Heyn watches his putt roll toward the hole during the War Eagle Conference golf meet at Sanborn.

The 2021 boys' golf season began on April 6 with Hartley-Melvin-Sanborn hosting Hinton at the Sanborn Golf and Country Club. The Blackhawks held off a late charge by H-M-S to earn the 196-199 win in War Eagle Conference play.

"We got beat by three, but battled really well after a rough start," said Hawk coach Mark Japenga.

Brody Spies led Hinton with a 46.

Scores for the Hawk JV were Charlie Conway 49, Spencer McCarter and Tanner...