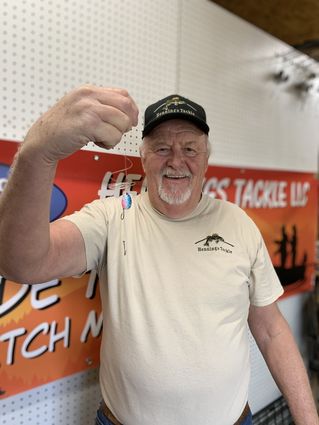 ave Hennings, of Hartley, holds up one of the many spinner rigs he and his wife sell through their tackle business.

Just like their fishing lures, Dave and Cindy Hennings aren't letting the big one get away.

The Hartley couple has grown their small tackle business into quite the catch over the past decade. Dave started dabbling in creating his own lures roughly 15 years ago, and eventually spun his hobby into Hennings Tackle.

"The business is kind of growing itself, and we're just going to ride with it and do what we can," he said. "It's still very much a mom and pop deal."

Dave has been an avid outdoorsman for as long as he can remember – his father frequently took him fishing, camping and hunting whe...