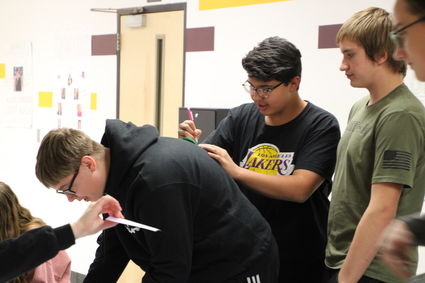 An H-M-S student fills out his ballot on a friend's back during the high school's mock election on Oct. 29.

By an 80-20 margin, Republicans swept races for president, U.S. Senate and U.S. House District 4. Just under two-thirds of high school students cast ballots – 64.2 percent – with the highest turnout recorded in the senior class at 85 percent. Only 41 percent of freshmen voted, which was the lowest of all four grades.

Jim Thomas' American Government class organized the mock election as part of its unit on elections. The instructor shared a questionnaire from the Sentine...